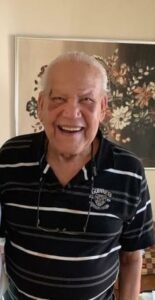 Mr. Corlette would have given years of outstanding service in the Customs field, particularly in the 1960s, when he pioneered operations at Morawhanna in the North West District, Region One, Barima Waini.

At the age of 45, Mr. Corlette was appointed to the position of Comptroller of the Guyana Customs and Excise Department, where he served for little over a decade (1970 to 1981). One of the many well-known qualities that defined his leadership character, was his open-door policy with his subordinates.

Shortly after retirement, Mr. Corlette migrated to the United States where he resided until his passing on Wednesday, December 30, 2020 in New York. A private home-going ceremony was held in his honour on Tuesday, January 5, 2021 at Melendez Funeral Home, Middleton, New York.

The Guyana Revenue Authority (GRA) mourns the loss of this Customs stalwart and extends condolences to his family and close friends.

May his soul rest in peace.

Any cookies that may not be particularly necessary for the website to function and is used specifically to collect user personal data via analytics, ads, other embedded contents are termed as non-necessary cookies. It is mandatory to procure user consent prior to running these cookies on your website.

Click on the start guide button to get a quick tour of how to use our new website!